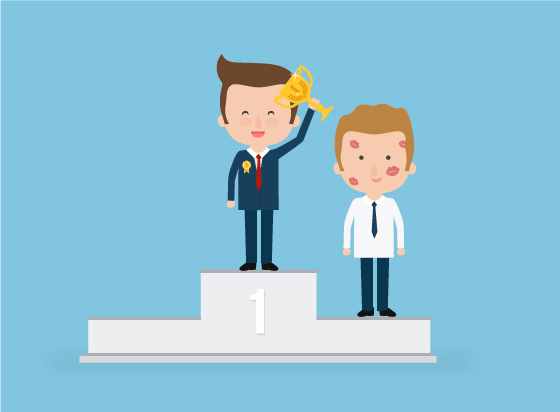 Last year I have published three(!) “biggest link building success” articles of 2013. Can I top that for 2014? Let me try. I didn’t write three “biggest” success articles to brag more last year. In fact

I tend to overlook my successes while I rather dwell on my failures.

Once I recognize there was success it’s hard for me to assess it. I succeeded more than once? Which success was the biggest? I can’t really say. Thus I cover more than one of them as possibly the biggest success. Judge yourself!

Success in numbers vs subjective success

I have had the single most shared article in my decade of business blogging published in 2014 with more than 4000 shares by now. No, it wasn’t on a mainstream publication. I usually got below 100 shares there.

So I covered this already in my first post this year dealing with the potentially biggest success. That one was obvious, after all the share numbers are public. Then I thought about the success that made me feel good the most.

Getting my “decade of SEO mistakes” post shared thousands of times was a bit embarrassing to say the least.

There was one kind of success I had that was not evident for outsiders while for me personally it was very uplifting. Is the subjective success less important than the one measurable by public numbers? I think subjectively felt success is sometimes even better. You can’t flaunt subjective success that much but it helps you to develop your strengths.

For years I have written for client blogs about blogging, social media and search for often very low rates. I was glad I could write for a living because I love writing and especially blogging and I didn’t consider it real work at the beginning. Thus I was satisfied with almost any amount paid to me as long as I was able to do what I love.

Last year I finally raised my rates to what seems to be industry standard. I looked and asked around what other writers of similar quality and renown charge.

Yet writing for third party blogs, even for marketing publications, still doesn’t make you rich. Last year I still didn’t earn enough by blogging so that I needed to work additionally for actual SEO clients to finance my writing “hobby”.

In a way I had to subsidize my writing with my other proper client work.

Meanwhile I was a bit jealous of all the professional blogs that had custom illustrations for their blog posts. I knew that I couldn’t afford to hire an illustrator myself though. Instead I have used free images with a Creative Commons license like I have done for years.

Then one day a guy from Freepik.com emailed me with an offer. At first I thought it was just another outreach message. Outreach messages are perfectly fine but they require work on my part in most cases where I get very little in return. Yet Alejandro from Freepik offered to work for me for free.

All he wanted in return was a credit for the image. I always credit my image sources with a link so that would be no exception for me. I didn’t even have to think about that offer. You have seen Alejandro’s images on my posts ever since. I only occasionally used Creative Commons imagery after that.

How Creative Commons images can backfire

Don’t get me wrong. Creative Commons images (I usually get them on Flickr by way of Compfight) are wonderful once you find a good one. Compfight helps to find free images but they rather sell stock photography instead. Personally I ignore most stock photography or imagery. It’s mostly bland and full of stereotypes. I rather take real world images from photographers around the globe than to feature ridiculous stock photography clichés.

There are also issues with Creative Commons images though. As I have been using them for several years, some of their owners have changed their licenses to the good old copyright. I have located several of such images on my blog. I had to replace them or at least remove them.

Another issue is that some Creative Commons images have a “non-commercial” license. Different people interpret that license in different ways.

As I have no ads on my SEO 2.0 blog an I do not earn money from the blog directly I thought it was not a commercial use until one image owner actually wrote me an angry message. He did not like the metaphoric context I put his photo into and tried to wield the license as a weapon for me to remove it.

Apparently for some people a commercial use is already given when you publish a business blog dealing with business topics. Others consider ad revenue as sufficient to call it commercial use. So at the end of the day you basically can’t use Creative Commons images with a non-commercial license on your blog. You don’t have to resell the images or something. It’s enough that you’re not a charity.

The intrinsic value of link building

Long story short in 2014 I took another big step into becoming a professional blogger. I was able to charge rates equal to my client work in SEO and beyond (as SEO still sells the best despite all the rumors of its death). The reason why is also significant: I get approached by blogging clients now.

Until 2013 I had to apply to job listings like everybody else despite my “big name”, large audience and all the experience.

I got my work out there consistently and colleagues who often have known me for years through modern day relationship building have approached me. When people seek you out they are of course willing to pay more. You don’t compete with others that much anymore. You create your own league.

not only to get recognized as a person but also to convey the value of your work. It’s not just the relationship building though. It’s the good old literal link building as well. Alejandro of Freepik approached me because a recommendation and link from a post of mine have so much value that I don’t even need to pay them for their work.

I “only” write for 3 to 4 blogs at once, including my own one, so that it’s not only about building links in the traditional “domain popularity” way. Freepik rather got several links from the same site. Nonetheless they were willing to provide me with custom illustrations to get the eyeballs as well, not just the link juice.

So there still is intrinsic value in link building, it’s not only about relationships

and all that hippie stuff I usually preach. It’s still also about getting direct visibility online. The link will be clicked by actual people, highly relevant audiences full of bloggers and Internet marketing professionals. They all need images.

I know this is not exactly the type of link building success story you may been looking for but it was important for me to tell it. It’s not just about getting hundreds of links using the latest tool or technique. Sometimes it’s such cooperation that makes the success big in a subjective way.

* The “biggest success” illustration has been made by my supporters from Freepik.com

The Next Level of Blogging: Examples of Video-Channels by Bloggers