3 Reasons Google’s Marketing Stinks – and why it’s costing them billions..

Google seems to have mutated into some kind of mutant King Sidam. Everything they touch turns to old (news).

Ask Joe Public who he thinks the leader of modern technological advances are and chances are he’ll say Google. And he’s probably right. Then why can’t Google seem to get it right when it comes to launching new products?

I’ll tell you why. But first I need to explain I’m not talking about Google’s acquisitions. They buy a new company every day. Whether it’s Motorola or Boston Dynamics (of terrifying Big Dog fame), they make strategic purchases to position themselves as market leaders in technology. Whenever they buy a company the ensuing press coverage surely boosts that company’s profile. That’s not their problem. Their problem is in launching new products.

First announced in 1901, Google Glass has been in tech news every 5 seconds ever since. You can’t move online without someone mentioning Google Glass. This isn’t the results of Google’s PR team though, it’s just because bloggers are lazy. They’ll write about anything that they think will generate page views. These posts are predictable and pernicious to Google’s overall success. Mostly they’re speculative or fluffed up with rumour, so by the time the real announcements come along we feel like we’ve heard it before.

Bloggers writing about something is one thing, but are people interested? According to Google’s own trend data, apparently they’re not. 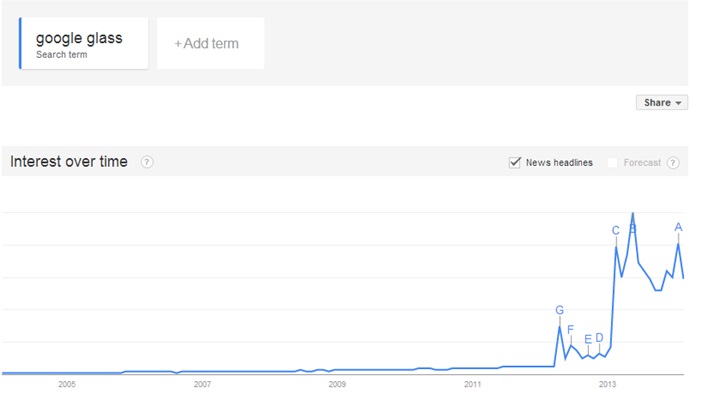 Compare this with the pageantry and sense of mystery surrounding other tech announcements. Apple hold a massive conference every year to announce their new products. This occurs a few months before the official launch, fuelling discussion until the actual launch. Here is proof: 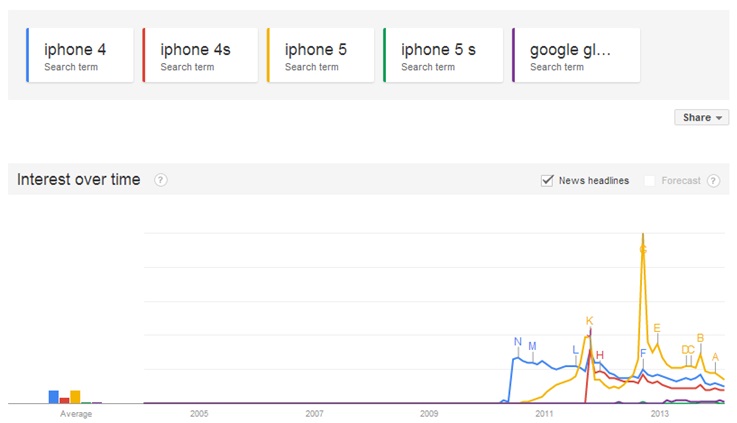 The same applies to the PS4 and XboxOne. 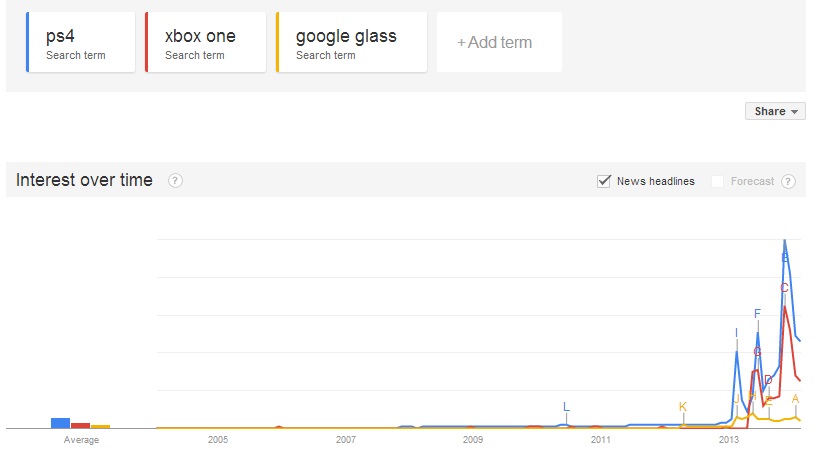 You could argue that this is an unfair comparison since these products had an existing market and Google Glass hasn’t been launched yet. I would contend that there is an existing market for Google Glass, but they’ve shown their hand too early. There’s no mystery and no awesome features for us to get excited about. Just a load of pictures of pretty people wearing obnoxious eyewear. And Sergey Brin beginning his transformation into Robert Downey Jr. Remember Google Helpouts? Don’t worry. Neither does anyone else…

Basically it’s a peer-teaching platform where you can teach (or learn) through video calling. The learner pays the teacher for their time and everyone’s a winner. Except Google, who forgot to do any marketing… 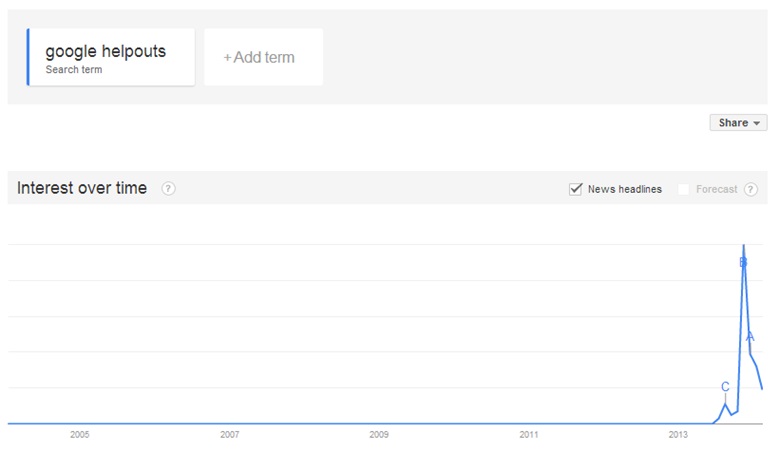 It’s a good idea in theory. The main problem is people can use Google’s fairly well-known search engine to find free answers to their questions for a dash of the time, effort and cost of using Helpouts.

Consider Helpouts as a start-up (one with a billion-dollar backing, but a start-up all the same). Most successful Start-Ups use a growth marketing model. They start out small and build their exposure as interest and logistics allow. It seems like Google just launched their platform and hoped for the best.

Here’s a comparison with a red-hot start-up called Ranku (for finding free degree courses). Other than offering an entirely unique and useful service, Ranku has the benefit of not being called ‘Google CourseSearch’. I’m of the opinion that ‘Google [anything]’ is starting to feel a bit stale. People like to talk about fresh new ideas more than ‘Look what Google is doing now…’

Google Helpouts also sounds criminally like Google Hangouts. To the point where I typed the wrong one about 4 times when writing the preceding paragraphs. Hangouts feels like Google arriving late to the party (about 11 years too late…) 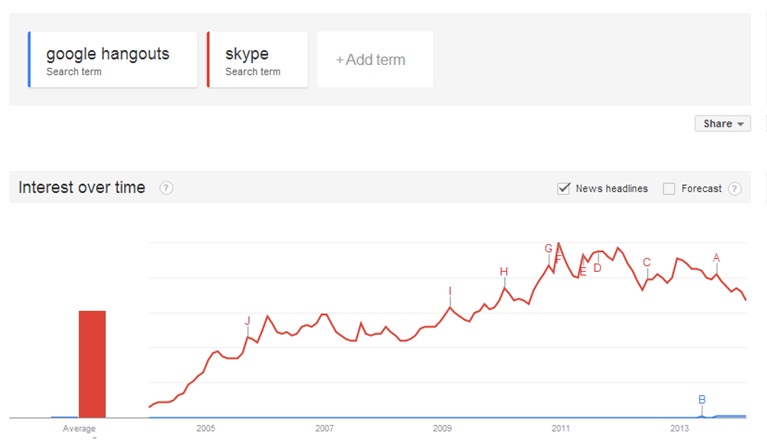 Speaking of being late to the party:

Or, as Google put it: 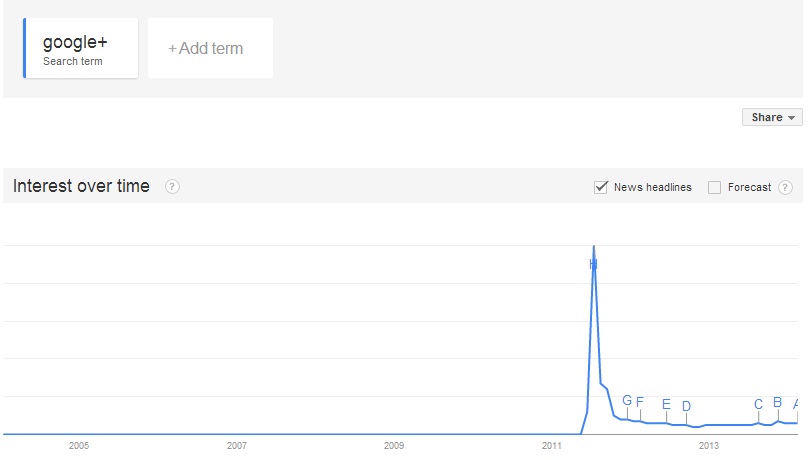 I think Google+ might be the exact moment Google’s PR went a bit wrong.

A social network that offers entirely no benefit over its rivals is a stupid idea to begin with. They’ve tried basic marketing, they’ve tried reasoning with us, they’ve even tried forcing us to get involved. The fact is, people don’t want it.

Like Vinyl, Betamax, DVD, and Blockbuster, there’s just no need for it. At all. Like actually no need whatsoever.

The PR campaign here just seems to be some kind of war of attrition. Google won’t admit defeat (I guess 300 million ‘users’ can’t be wrong), so they’ll just keep flogging a dead horse. After all, they have YouTube and Gmail – properties their rivals at Facebook and Twitter can never even hope to emulate. All the same, Google+ is a a fart at the proverbial shit fight. 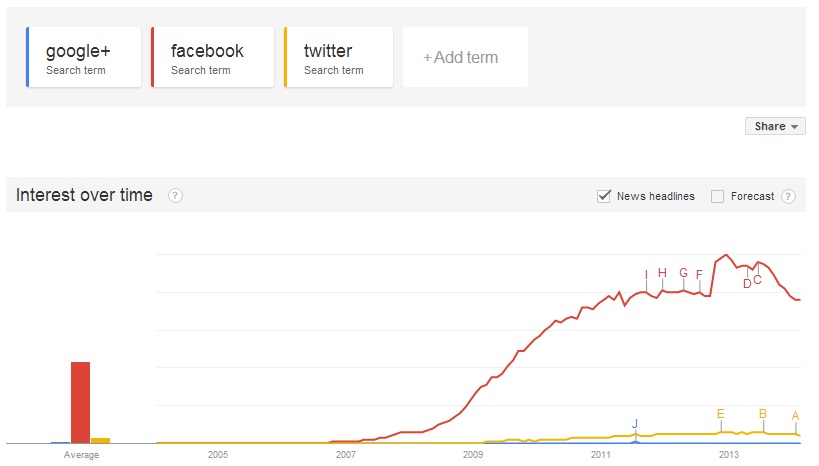 It’s all about the Billions

You could argue that these losses of interest are negligible in the overall scheme of things. Google still has its crafty little fingers in pies of every flavour – so why does it matter if a couple lose money?

That’s just bad business. Why do something if you’re not going to do it right? Google has the reach, the money and the talent at its disposal to turn virtually any idea into a profit – it’s just about finding the right market (i.e. not launching your rocket into space and hoping for the best). This hit-and-hope mentality needs to change.

We hear a lot of rumours about Google’s self-driving car. Here’s what they need to do to ensure PR success and sustained interest:

1)      Don’t drip-feed us with non-news stories about what colour the steering wheel might be, or pictures of pretty people in the passenger seat.

2)      Don’t market it as something instantly lame like ‘Google Drivecar’. Give it a cool modern name that we won’t shudder to hear.

3)      Create mystery and speculation around it. Talk about the crazy things it can actually do. Design elements are not cool functions.

4)      Have a launch event where you tell everyone the same thing at the same time. Make it awesome.

5)      Make sure all the marketing is as cool as this (it actually makes us get goose bumps about the possibilities):

6) Watch this Ted talk. It’s about focussing on why a product is great rather than just what it does.

And if all else fails, you can make an infographic about it.

If you don’t work at Google but you want to talk about an online PR strategy for your company, give me a call.

Google Goes After Brand Names With Its Comparison Engine.

(Another) New EU Directive: Will it Inhibit or Enhance Online UK Retail?