You’re snowboarding in the Canadian Rockies when a whiteout hits. You’re stuck, as good as blind. Freezing. If you’re thinking, ‘There’s gotta be a better way to do this,’ you might have what it takes to be an entrepreneur.

Ruroc is a British snowboarding company that grew out of just such a scenario. Its original founder learned the hard way that the regular snowboarder’s get-up – bandana wrapped around the face, helmet and goggles on top – left riders over exposed to the elements. Off the mountain and back in the UK he developed an idea for a fully integrated system where goggles, mask and helmet would join seamlessly to prevent any kind of wind chill. He took an early prototype to a design agency that turned it into a viable product.

But ‘viable’ didn’t automatically mean ‘profitable’. It’s been a rocky road from struggling start-up to snow sports success story. And according to CEO Daniel Rees, Facebook was at the centre of the transformation. 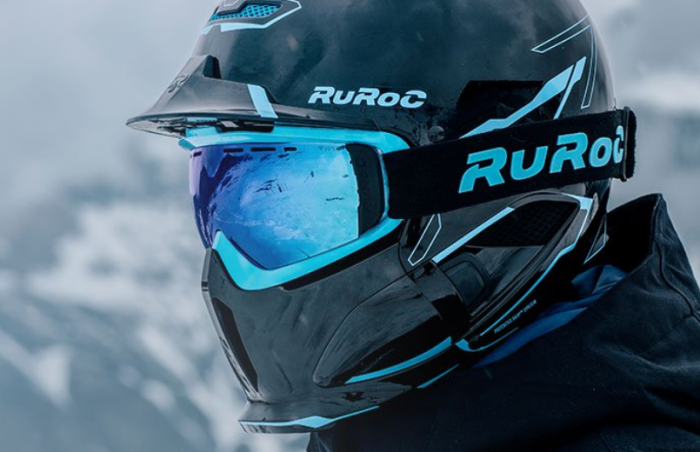 Flashback: 2007. Flush with cash and optimism, Ruroc launched its radical new helmet into the competitive snow sports market. It took the traditional route, “ordinary PR” as Rees describes it, taking print space in the likes of GQ and Men’s Health. But something wasn’t working. The brand wouldn’t stick. It wasn’t long before the capital was gone and the company was bankrupt. Ruroc re-launched in 2008. By 2010, it was in administration for the second time.

Enter new investors who brought in Rees. “I don’t actually get to snowboard much these days so I’m a little rusty,” he admits. “I love it, but compared to our Ruroc fans? They’d laugh me off the piste.” Rees may not have known his backside from a nollie, but he did know a thing or two about marketing. “I was in the middle of selling one of my businesses and I needed a new challenge,” he says. “The guys who invested in Ruroc after it had gone bankrupt needed somebody who knew social media. That’s where I came in – I set up all our channels and got involved in pretty much everything from day one.”

At first, despite Rees’ background, it looked like history was going to repeat itself. “It was getting to the stage where we genuinely thought it was going bankrupt again,” recalls Rees. “Nothing was really working. We had this moment where we sat down and said, ‘If we can’t sell 800 helmets over the winter season that’s it – we’re packing up and we’re going to close it down.’”

Almost as a last resort Rees turned up the spend on the company’s Facebook Page to £40 a day, using Right Hand Side ads and native targeting to reach as many potential customers as possible to try to get them to buy a helmet on Ruroc’s website. It was September 2011. The effect was immediate: “We sold more helmets in that one weekend than we’d sold for the last 6 months. From then on Facebook spending became impossible to stop.”

Two years later and the turnaround in Ruroc’s fortunes can hardly be understated. “We were genuinely at the point where the business was going to go bankrupt for the third time,” says Rees. “In our first nine months prior to Facebook we turned over something like £10,000. This year, for the 12 months to May, we’ve just declared £1.1m turnover. So we’ve sold 7,000 helmets for the year and posted 300% year-on-year growth.”

Rees is confident that success can be traced back to Facebook for the simple reason that it remains the company’s only advertising channel. “We’ve attempted to use other advertising channels alongside Facebook but can’t get anywhere near the results,” he insists. “Google search ads don’t work at all for us as we have such a visually striking product. We’ve not found anything that matches what Facebook can offer yet.”

At this point, Ruroc has transitioned from the Right Hand Side to News Feed (as it adds brand marketing to its online sales goals), and now to mobile – where the click-through rate on ads to its site are rocketing. “Something like 60% of our fans access the website through mobile,” says Rees, “and I’m 100% sure that they’re all coming through Facebook.”

Asked how they’ve done it, Rees immediately points to Facebook’s targeting tools. “The helmet used to be seen as quite niche. We get a lot of people saying it’s too bold for them, or it looks like Darth Vader. But Facebook has given us the ability to find the people out there who actually think the Stormtrooper look is cool and want that on the slopes. No one has ever had that before. You can’t put that kind of thing in a newspaper,” he laughs.

Ruroc has seen particular success with Custom and Lookalike Audiences, targeting tools that allow any company with a CRM database to find its current customers on Facebook and create a ‘lookalike’ segment of people who share similar characteristics. In fact, lookalikes have been so successful for Ruroc that its marketing efforts have actually started to look more like product development.

“We always talk about what our fans like, what they do and what other ways we can target them and whether we can develop products they would also like that are in a similar vein to Ruroc,” Rees explains. “With the insights that we got from Facebook, we realised that the majority of our fans crossover with downhill mountain biking. What Lookalike Audiences have given us is the ability to start developing new products, new Ruroc helmets, with our design cues but to fit the market that our original helmet has also attracted. Out of our 450,000 fans, yes there’s a lot of them who like snowboarding, but there’s also a lot who seem to be more into motorcross and MTB. So we’re using that information to develop new helmets with a variety of certifications – not just ski and snowboard.”

Clarification: This article was originally posted on Facebook. Datadial did not carry out the Facebook campaign for Ruroc, we are simply posting here as an example of the power of Facebook marketing, especially in gadget orientated, niche sectors.