How the Daily Mail Became The Worlds Most Read Newspaper.

Love it or hate it, the Daily Mail has always had the power to shock. With its daily obsessions over immigration and ‘human rights insanity’ to a determination to cover every tiny detail about the Royal family and celebrity stars, the paper has an almost equal share of critics and fans. Yet although this British national newspaper is not the biggest selling daily in the UK, never mind globally, it has been named as the biggest online news source in the world overtaking the New York Times (comScore, Feb 2012).

All the British national papers began their internet websites on a more or less equal footing in 2008. While the Times (in June 2010) decided to go down the route of paid subscription content, the Daily Mail and most of the other papers decided to monetise their websites through the use of paid advertising. The announced in June 2012 that they had become profitable for the first time.

However, the success of the newspaper’s online operations is set to continue growing. Guy Zitter, managing director of Mail Newspapers, told an industry conference in June that the advertising potential of the Mail Online was still “not even touching the sides”. Whilst advertising revenues are predicted to top £30m this year, two thirds of this still comes from the UK, whereas two third of the Mail Online’s audience lies elsewhere. – Four Media

For this strategy to work, they would have to be able to drive traffic to their websites in high volumes. Most of the newspapers translated their daily issues of the paper into online editions, using traditional journalism and headlines to create their websites. While this ensured that they kept their loyal readership, the websites were not able to maximize the attention of the search engines.

Setting up a Dedicated Web Operation to Write up News

The Daily Mail from the start set up a separate web operation. Their homepage is made up of hundreds of stories, each clamouring to be read. The headlines read as summaries of the story, but they are also anchor text, a link that when clicked will lead the reader to the story. The story pages themselves are chock full of pictures, diagrams, commentary, YouTube clips, in fact anything that is vaguely relevant to the story. The links are designed to keep you reading and following other stories of interest on the Mail Online website, in the process maximizing their advertising revenue.

One section of the site that is deliberately written for the online version and doesn’t feature anywhere near as heavily in the print version is the celebrity news section. This is a deliberate ploy to target keyword with high search volumes as well as developing a loyal online readership around these topics. The popularity of the celebrity content is shown when looking at the directories on the site with the highest search visibility, with TV and showbiz capturing a larger share of visibility than news.

There is a column of abbreviated stories, small pictures and anchor-linked headlines down the right hand side of every page. This public hunger for celebrity stories has driven trending articles upwards for the Mail Online and they are regularly updated. They will rewrite and republish stories in real-time if the interest is there.

The content is refreshed at a fast rate. The web team receive the articles from the journalistic team and tweak them to suit the online readership. Articles are also gathered from other news websites and rewritten. This enables the team to put together a large amount of news stories quickly, cheaply, and optimise them for the website and publish them. A frequent criticism of this tactic is that journalistic integrity is often compromised, facts aren’t checked as there isn’t time, and often articles are closely plagiarised from other sources. 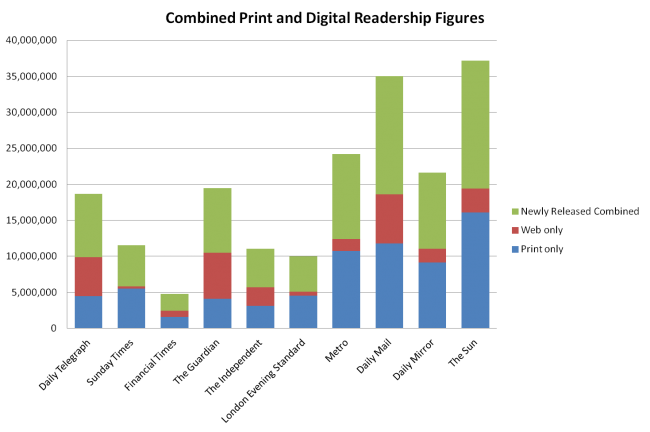 Developing News for the US Audience

A large part of the Mail’s success is based on their growing US readership. Dedicated journalistic web teams were set up in Los Angeles and New York. The website has a link to its US edition across the top tabs of the homepage. The Mail’s strategy drives a high volume of web traffic to the website by offering popular stories. Most news websites advertising revenue is driven by page views and the Mail’s success in encouraging visitors to click more links is instrumental in becoming the most widely read news website online. The Mail Online aims at the English speaking world and there is no shortage of potential readers.

SEO strategy has played a large part in the website’s popularity. The mini-article type headlines are long tail keywords, researched and utilised for their popularity in the search engines.
In-depth articles help to maximise long-tail search visits, and the incorporation of images, diagrams and rich media help to encourage other sites to cite them as a source to develop their link profile.

But the website’s most successful manipulation of the web involves social media. The Mail Online wants to be the news website that everyone is talking about and often the tactics involved could be considered as linkbait, that art of creating something controversial that provokes debate by manipulating emotion.

Samantha Brick, one of the Mail’s regular journalists wrote an article entitled ‘Why Do Women Hate Me because I’m Beautiful’ in April 2012. During the following 24 hours, the article trended on Twitter, over 200k Facebook likes and received 1.5 million comments, most of them uncomplimentary.
At the time she was one of the most talked about women in the world. The Mail Online received backlinks from trusted and relevant sources including other national newspapers, Twitter, and many different blogs which included the Business Insider, The Huffington Post, Gawker and Buzzfeed amongst others. Overall the article helped to generate more than 4,000 links to the site. There was also a follow-up article with Samantha Brick in The Independent and TV and magazine interviews which followed.

In SEO terms, this kind of exposure is pure gold and the Mail Online gained a lot of attention. However many of the commentators were concerned at how deliberately the furore was created and maintained.

The Rush to Publish – The Mail Online’s Public Mistake

This need to be constantly at the forefront of trending articles can turn sour as the Mail Online found out when it tried to publish the results of the Amanda Knox trial appeal in October 2011. Two versions of the appeal story had been written up. The wrong story was published which stated that the appeal had been turned down when it had in fact succeeded. The story was only published as fact for 90 seconds, but it had been noticed and the Press Complaints Commission upheld a complaint about it, citing concerns about the accuracy of the reporting.

Several large blogs picked-up on the mistake and the rest of the national press picked it up as a story. However even when they get it wrong, people are still talking about the Mail Online, discussing it on Twitter and posting the links.

Success At The Expense Of Journalistic Integrity?

The Mail Online’s success has been due in no small part to its ability to understand that it was important to differentiate between the newspaper and online news markets and to ensure that each was correctly targeted.

It tempts visitors to stay and click on two or three pieces with its anchor-linked teaser headlines and most articles are commented on. A quick check of the website today and the lead story has already collected 1099 comments; another story further down has 50 comments, yet another 531 comments. The Daily Mirror on the same day has its highest number of comments as 18 on one article; the Sun has a story with 50 comments.

The Mail has a knack of getting its readers to participate and that is one of the secrets of its success.

The Mail Online is the most successful of the British newspapers to translate to online readership, but it has adapted its techniques to achieve its goal. Coincidentally, the Times website makes more revenue from its subscription service, but it serves only a fraction of the readership of Mail Online.

6 Simple Ways to Optimize Your Facebook Page for Graph Search

What Can Cognitive Science Teach us about Outreach?