Ipads convert at double the rate of desktops.

Affiliate window have released data that shows the huge lead that iPads have gained over other mobile devices when it comes  to acquisitions.

The data cover 81.9m visits to merchants and 1.57m sales. Admittedly most of affiliate traffic is usually acquisition traffic but the results are also borne out by other data from other suppliers. 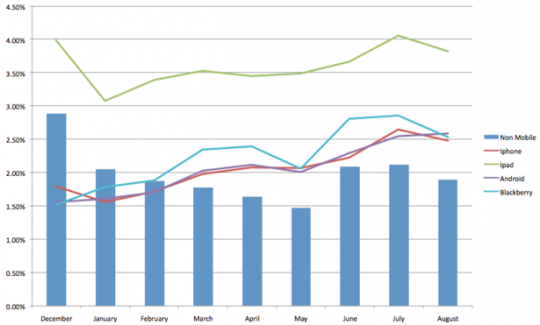 Fashion sites showed the highest conversion rates showing double the percentage of total sales of other sectors. This is not true for other devices.

Ipad users are converting at a higher rate than desktop users despite a poorer user experience in some cases.  Why might this be so?

According to Affiliate Window’s Matt Swan:

iPad users typically have higher amounts of disposable income, know what they want to purchase and are using their iPad’s to transact. We typically see that a lot of desktop traffic is where consumers are in the research phase. This traffic is not necessarily going to convert and is why we are seeing lower conversion rates through desktops.

In addition, the way in which people are using Ipads and tablets may also impact this. People use their iPads at home, perhaps browsing while in bed on a Sunday morning, or on the sofa while watching TV. In short, it’s more of a lean-back experience.  The fact that jumping between websites on an iPad is also slightly more painful on an Ipad may diminish the desire to price compare in great detail, particularly if price is not the largest decision factor.

Only 16% of companies are conducting any kind of usability testing on tablets, but these stats show that retailers (ad fashion brands especially) need to take notice of the iPad.