Ryanair – Their Attitude To Online PR Part Of A Bigger Reputation Problem.

A throwaway comment on a blog by a Ryanair staff member has led to an online storm that now threatens to spill over into the national press and potentially harm the already tarnished reputation of Ryanair even further.

It all started when a Dublin based web designer Jason Roe posted on his blog that he had found a potential bug on the Ryanair website which changed the displayed price of a ticket to â‚¬0.00 when he amended his flight times.

At this stage Ryanair had three options of how to deal with this,

In the event they opted to go for #3.

jason!
youâ€™re an idiot and a liar!! fact is!
youâ€™ve opened one session then another and requested a page meant for a different session, you are so stupid you dont even know how you did it! you dont get a free flight, there is no dynamic data to render which is prob why you got 0.00. what self respecting developer uses a crappy CMS such as word press anyway AND puts theyâ€™re mobile ph number online, i suppose even a prank call is better than nothing on a lonely sat evening!!

Although this was done anonymously, the Ryanair staff member was easily identified through his IP address. At this point having their staff members abusing people online becomes far more of a news story than a bug on their website ever was, and starts to get coverage on the major social news sites popular with bloggers like Digg, Reddit and Twitter.

Although Ryanair are starting to look bad for not listening to their customers, an apology and explanation for the comments would probably have sufficed and the story would have died before it gained any more momentum.

“Lunatic bloggers can have the blog sphere all to themselves as our people are far too busy driving down the cost of air travel”.

This is now becoming a major story threatening to blow up in the faces of Ryanairs communications department. As well as national press coverage of the story this morning in The Times and The Telegraph people are now threatening boycotts of the airline over their treatment of customers, dragging up old grievances, and has sparked a raft of blog comments and even protest sites.

What Can We Learn From This?

Is This Part Of A Wider Failing At Ryanair?

Managing the reputation of a budget airline such as Ryanair can never be an easy task at the best of times. Uphappy customers and poor press all take their toll. However, performing a quick audit of their online reputation throws up several areas for urgent attention and improvement.

Their search results, that threaten to take a battering after the latest round of blog posts and national media attention are already suffering. I have highlighted their own properties and positive results in green and negative results in red. 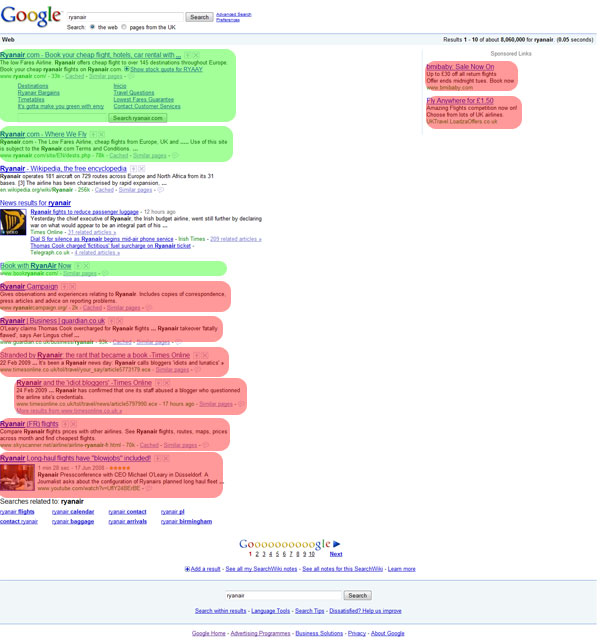 Worryingly for Ryanair, not only are they suffering from negative press in their search results, but there are also competitors and affiliate websites that are potentially stealing business from them, both in the natural results and though pay-per-click adverts.
Failure to respond to this is undoubtedly costing them business and keeps other Ryanair properties such as their hotels, magazine and insurance websites off of the first page. The PPC competition needs to be addressed though a campaign of their own.

In terms of their reputation on social media they fare even worse than in the search results. Searching Technorati for blog posts about them brings back an overwhelmingly negative sentiment, the same is replicated on Twitter, though Digg is more mixed however Michael O’Leary is named among the worst corporate leaders of 2006. Lots of negative sentiment to Ryanair in the comments though. 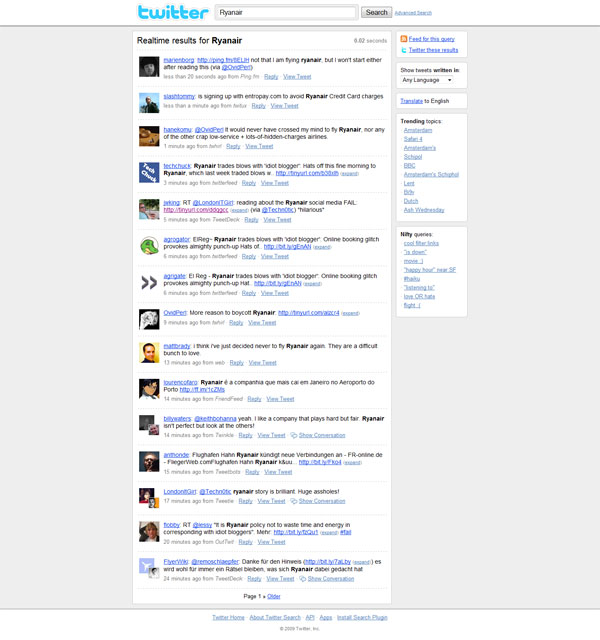 Ryanair protest sites such as Ryanair Campaign and a Ryanair Customers Google Group seem to be very busy with complaints from users and boast visitor numbers running into the hundreds of thousands.

5 Steps For Ryanair To Take To Fix Their Online Reputation

Link Building 2.0 - Getting Attention In The Social Age

Changing The Way You Browse