“The Daily Mail is a worm-ridden sack of pus, sucking the life out of everything that’s beautiful about our world”

– reportedly the opening lines of The Dead Sea Scrolls. That said, they run one of the most successful websites on the internet.

First, a quick note on ‘Virality’ and ‘Sharing’. ‘Viral Content’ is a term that can only be applied retrospectively. Nobody makes intrinsically ‘Viral’ things – it’s theoretically possible for anything to go viral provided it’s appealing and enough people share it. When I talk about ‘Sharing’, I mean exclusively the sharing that takes place on social media. Tweets, Retweets, Likes, Shares etc. The two concepts go hand in hand.

I’m a big fan of Jonah Berger, author of ‘Contagious’. Berger has scientifically tested different theories about virality and sharing to see what makes the best web content. He gives a selection of ideas. They are:

Social Currency – Make sure you’re supplying information that people will want to know.

Triggers – Make sure it’s something people are likely to be talking about.

Public – Do everything you can to make it sharable

I will now go through and systematically address each of these points and explain how the Daily Mail uses them to great success.

People love to show off about things they’ve learnt. ‘Pub Ammo’ is the toe-curling cliché that seems to sum this phenomenon up neatly. If you make something that you think people will want to tell people then they’ll want to share it.

A cursory glance is enough to make you think we’ll all be riding around on ‘hoverboards’ next week, but a little critical thinking tells us that this would only apply to hoverboards that were 1mm in size. Take away the misleading opening question and this article could be quite interesting – and it certainly fills a knowledge gap (albeit not the one it advertises), plus 447 people shared the article

…presumably with this expression on their face:

You don’t have to be misleading with your own content. Just telling people something really, really interesting will be enough to ensure it gets shared around.

In creating content, I would normally advise you to see what people are talking about by going on Twitter or Reddit and trying to tap into that subject with your own slant. Giving a different perspective can be good. However, if you’re the Daily Mail, instead of adding to the discussion you can just make news up about anything you like.

Here is a selection of things deemed newsworthy by The Mail. I have provided notes on how each tapped into ‘Triggers’.

‘The Only Way is Pregnancy: Billy Faiers and boyfriend Greg are ‘expecting their first child’ in the summer’

(5 shares in the first 20 minutes. Not bad. I have no idea who these two people are, but based on the particularly rubbish pun I guess they’re reality TV stars. Obviously I’m not the target audience, so possibly they’re well-known in certain circles. The people who are interested in the breeding habits of television stars will be likely to share it).

‘What are THEY doing together? Justin Bieber takes Selena Gomez for a Segway ride around his neighbourhood’

(Obviously ‘Justin Bieber’ is a hot topic. I forecast that there is someone Googling ‘Justin Bieber’ somewhere in the world every second of every day. By running a non-story about ‘Justin Bieber’, The Mail ensures it will appear in the news results for ‘Justin Bieber’, increasing its clickthroughs and engagement. This article had 79 shares in an hour)

‘I would rather be alone with dignity’: ‘Relieved’ Jack Cockings opens up on Twitter following abrupt ‘trial separation’ from wife Melanie Sykes

(Only 4 shares for this one. Probably because nobody knows who Jack Cockings is. I’ve heard of Melanie Sykes, but she’s not the focus of the story, so this is quite unremarkable.)

(Obviously the whole world will be tuning in for ‘CBB’ tonight. And readers will be pleased to learn that Sam Faiers (possibly a relation to the Billy Faiers above?) is a potential housemate. A reality TV star is going on a different reality TV show. This is the greatest thing to happen since The Flintstones met The Jetsons. For tapping into a ‘big new story’ (CBB) they’ve earned 34 shares).

You may think that these articles don’t have a particularly huge number of shares, but bearing in mind The Mail produces hundreds of new pages each day, these shares (and views) soon add up.

We all know that the Daily Mail’s articles usually tick one or more of the following boxes:

According to Jonah Berger, the best emotion for getting people to share things is ‘Awe’. If you create something awesome, people will be more willing to share it. Some people would incite ‘awe’ by cataloguing every sighting of Jesus’ face in everyday objects… but The Mail doesn’t care about awe. They’re targeting a different emotion (and one which I personally think would be more useful to target…) Anger.

Anger causes arousal and arousal causes activity. If you spend an hour on Facebook, you’ll see roughly 66,753 posts from your friends, outraged about some story or another.

The article is about a woman who had post-natal depression and committed suicide after seeking help for her mental illness. The article (written in the words of the woman’s husband) suggests that she was failed by the system because the hospital staff focussed on the breastfeeding issue and ignored the mental health issue.

Firstly, women aren’t admitted to hospital just because they can’t breastfeed. Maybe she had Mastitis and needed antibiotics, maybe the baby was losing weight and needed to be monitored. In any case, this probably wasn’t the focus of the hospital staff when treating her.

Secondly, breast feeding wasn’t the direct cause of her suicide. She still killed herself after she’d fed her baby with a bottle so although the breast feeding problem probably wasn’t helpful, it wasn’t the only cause.

Thirdly, hospital staff aren’t trained to treat mental health issues (it’s still a fairly new discipline). Even then, people aren’t admitted on mental health grounds unless they’ve attempted suicide before or have a solid plan to do so.

So this article is unscientific, inaccurate, insensitive, sensationalist, anti-NHS and misleading. But it was still a viral success.

People could have shared it for 4 reasons:

1)      They applied basic critical thinking and were outraged that this type of ‘journalism’ exists.

2)      They were angry that a woman was driven to suicide by a breast-feeding obsessed society.

3)      They were angry at the mail for suggesting the breast feeding obsession is a bad thing.

4)      They were depressed by the story (sadness is still an emotion, though not as arousing and therefore not as useful for sharing).

And with every angry share, The Mail grows in strength.

(If you’re creating content for your business, a bit of controversy is ok but it’s probably better to stick to ‘awesome’ stuff)

Content that teaches people how to do something in a simple way is a success story in the making. Life Hacker has made its entire business model out of it, and there are thousands of similar tips and tricks doing the rounds all the time on social media.

The Daily Mail doesn’t really target this aspect too much (unless you find paparazzi shots useful), but occasionally they’ll offer something vaguely practical:

The article doesn’t answer the question, the ‘expert’ is a dietician who says ‘there is no quick-fix for weight loss’ and the rest of the article reads like a series of press releases from dieting products.

But you can see they were trying to be useful, and for their trouble the article got 226 shares.

If you were thinking about content for your company, you could keep it interesting and useful and summarise some kind of industry secret. That would be pretty valuable. The more useful, the more people will share it and promote it.

Making your content easily sharable is the key to getting it shared. If you can prompt people to talk about your company on Facebook or Twitter then you’re on the path to viral success.

Just think about The Daily Mail. If you’ve ever taken to Twitter or Facebook to complain about the latest ball of hate spouting out of the Daily Mail, then consider yourself a sucker.

Last year, Samantha Brick wrote an article claiming other women hate her for being beautiful.

She claimed that although she is heaped with gifts from men, she is admonished by jealous women. The article included lots of pictures of Brick. I don’t want to republish them here (I’d have to credit The Mail) so instead, I’ve done an artist’s impression of Samantha, complete with Rotten-Seafood Grimace. 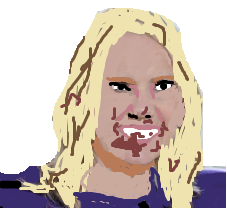 Bearing in mind The Mail’s readership is 52% female, the formula of ‘piss off the most people’ seems to be in full swing. People took to Social Media in their thousands to complain. In the blink of a heavily mascaraed eye, ‘Samantha Brick’ was trending on Twitter and the firestorm of comments drove an untold amount of traffic to the Daily Mail site.

Digital success is fickle. While it’s likely 100% of the Tweets were chiding Brick, they turned out to be a tool of success. By complaining about her en masse, the Twitterers strengthened her platform – lifting her onto a pedestal and turning an unknown woman into a ‘celebrity’ overnight. Now we have to put up with her trending on Twitter every time she meets her controversial opinion deadline.

I mean ‘we’ as a species. It’s possible other species also like stories. Of course, there’s the famous case of the bonobo which learned a rudimentary sign language. He was able to tell the zookeeper that the missing toucans could be found in the lion’s belly. Amazing.

I made that up, but I reckon you liked it. People like stories. See?

I’m afraid The Daily Mail’s stories aren’t quite as heartwarming as mine.

They’re ‘human interest’ I suppose. The breastfeeding example above is a beacon of story-telling. There’s a beginning, a middle and an end. A hero (the woman who died). A villain (the NHS). And a moral (don’t obsess over breastfeeding?).

Other stories the Daily Mail has introduced to the literary cannon include these heart-warmers:

‘You’re the best dad ever’: Mairead Philpott’s sick letter to a vile father of 17 who killed six of their children in a house fire’

‘Kim Jong-Un killed his ‘scum’ uncle: Dictator had him stripped naked, thrown into a cage and eaten alive by a pack of dogs’

These stories are so reductionist they can fit into one grammatically-questionable sentence, but that’s part of their beauty. You’re intrigued by them and you click on them to read more.

Hopefully this article has helped you understand why The Daily Mail is so consistently horrible.

In the words of Pope Benedict: ‘I DID IT ALL FOR THE RETWEETS, BABY!’

If you want to emulate this kind of viral success, give us a ring and we’ll sort you out with a bespoke content marketing strategy.

P.s. If you don’t like anything I said, you should probably share this with everyone in your social circles and possibly write a blog post about me (but be sure to link back).