With the UK elections fast approaching I thought it would be interesting to take a look at how well the major UK political parties were using social media to connect with voters.

With Barack Obama famously using social media to court the youth vote in the US elections, social media is now a viable  platform for politicians to connect with people on a large scale.

All of the UK parties are maintaining a social media presence, with Facebook pages, Twitter and YouTube accounts prominently linked from their respective websites. To take a snapshot of activity and a gauge of its success I recorded the following metrics, 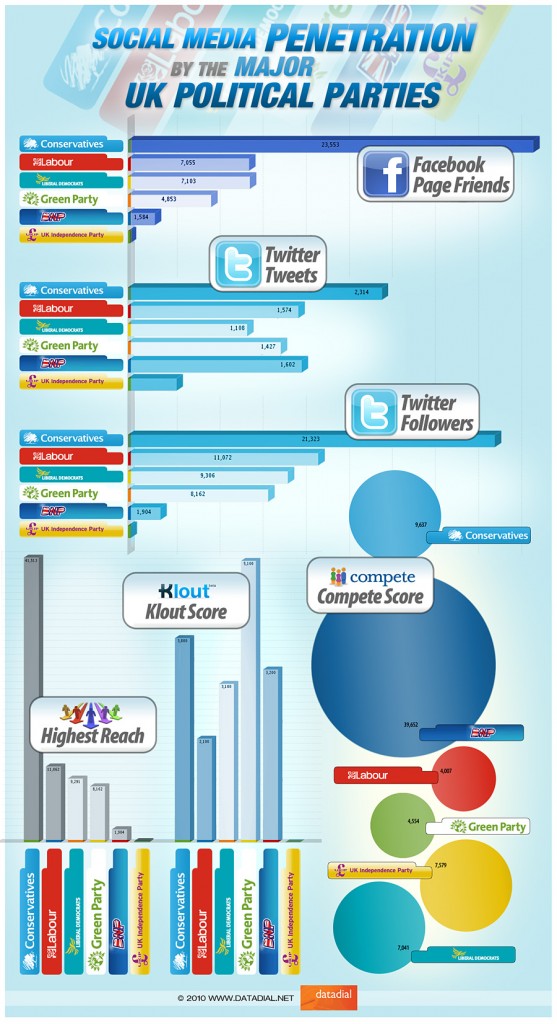 While all parties get points for maintaining a social presence on the major social sites The Conservatives are way ahead of their competition when it comes to the number of raw followers and the reach of their campaign. The Green Party received the highest Klout score, a measure of their influence and interaction on Twitter.

Interestingly enough the extremist BNP received by far the largest level of traffic to their website, but were one of the lowest scorers when it came to followers and interaction levels – perhaps an indication of voters researching their headline grabbing policies, but a degree of unwillingness to follow and interact with them, will this translate into a lack of votes?

On the whole though the UK parties are doing a fairly poor job of leveraging and interacting with social media users. Compare the Conservatives 23,000 Facebook page friends with Obama’s profile currently over the 7.5 million mark. Even allowing for a smaller population and  lower levels of social media engagement it’s clear that campaigns are failing to achieve what they should be doing. It’s difficult to tell if this is due to campaign mis-management, or simply voter apathy after recent political events.