Webmasters! Top Reasons You Should Upgrade to Windows 8. 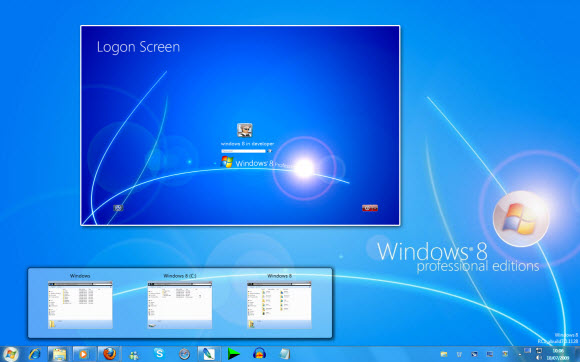 Upgrading to Windows 8 has been made very easy and surprisingly cheap. If you have Windows 7 currently installed on your machine and at least semi-decent specs, then you can upgrade to Windows 8 for $40 in no time at all.

But the question is, do you want to? With so many changes in Windows 8 this is a big decision and it’s not quite so straight forward as it was when you chose to embrace Windows 7. This has been designed as a touch and mouse based OS meaning that some of the things you’re familiar with just no longer exist and meaning that you’ll have to learn some new tricks and adapt to a new way of doing things. There’s no Start button for instance, and the Desktop is no longer the centre of everything you do.

Despite these changes however I’m going to argue that Windows 8 is a worthwhile upgrade and that you should on this occasion opt to embrace change – particularly if you run a blog or website or otherwise work online. Here’s why…

The boot time for Windows 8 has been said to be about twice as fast as the boot time for Windows 7. This means that you do get a ‘close to tablet’ experience when it comes to quickly loading up and getting started which means that you don’t have to sit waiting as long for your computer to load up so that you can get typing. Five minutes saved a day even is worth investing in, but you’ll save more than that because the software all loads quicker too.

While most of us still do most of our work with a keyboard and mouse, if you do have some kind of hybrid device then there’s no question here – you should install Windows 8 because you’ll get a lot more from that touch screen (and the swiping from the edges is very quick to operate with the thumbs).

Windows 8 represents change, but if you stick with Windows 7 you’re going to be left behind. Let’s think about what your other options are here – OSx? Linux? While you might like those two options, either of them are going to represent a bigger change still than switching to Windows 8 because they won’t run your ‘legacy software’ (in other words software for Windows 7). If you want to run the software you’ve loved and paid for, but you don’t want to be stuck in the past, then Windows 8 is your only realistic option (other than maybe Linux running Wine…).

Having an app store on a PC is an interesting idea and could be a great way to get cheap games delivered to your machine and handy little apps made by developers. Meanwhile if you’re interested in app development then potentially this is going to represent a very real money making opportunity with a HUGE market and limited competition so it’s worth getting involved.

Whatever else you say about Windows 8 it does look cool. Sometimes just changing things up is interesting and exciting anyway, but when it looks this good it’s definitely worth taking the plunge just for a bit of something new. And you can always change back…

If you run a tech blog then you need to have Windows 8 on at least one device so that you can write about it. Even if your blog is in a different niche though, this is still going to put you at the forefront and mean you can join in with all those Windows 8 competitions rather than standing outside in the cold…

Is Video a useful SEO tool?