Why Twitter Is A Search Engine – And It’s Better Than Google.

A bold statement to make maybe, and a few months ago I would have laughed at anyone making such a claim, but over the past few weeks and months Twitter has evolved into something unique that Google, and indeed no other search engine has managed to achieve.

Lets get one thing straight – Google is still the search engine to beat when it comes to archiving vast quantities of historical information and giving users a simple interface to retrieve this stored data. If you want to find expert reviews of that new LCD TV that you’re thinking of buying, research your homework, find that website that you can’t quite remember the URL of, look for a good cheesecake recipe, and whole host of other search query types, then Google is your first port of call.

However, where Twitter is coming into its own is enabling its users to get real-time access to information from real people.

Three main factors have contributed to Twitters strength in this area and will act as barriers to entry for others,

1. Twitter turns users into publishers – on Twitter people are the key. Everyone using the service is a publisher. Posting information, ideas and facts that effect and relate to them.

2. Achieved a critical mass – over the past few months the enormous growth of the Twitter user base means that with the huge amount of information being published every day by a massive number of users now increase the chances are that someone will have posted on the subject you’re looking for, and if needed you can even contact them directly.

3. Mobility – The concise nature of the service means that it is one of the first web services that is truly suited to use away from the computer and gives people the ability to post and access information on the go. 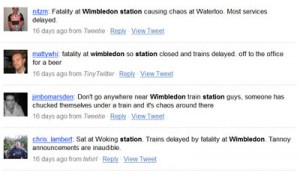 One of the first examples that brought home the power of the service to me personally was when travelling through London a couple of weeks ago only to experience the usual travel chaos.Â  A quick Twitter search on my phone revealed that depressingly there had been a fatality, and the station was unlikely to reopen for some time. With the use of Twitter I was even able to meet up at a bar with some friends who were also stuck in the area, and we then got updated via a Twitter travel service when the station had reopened. 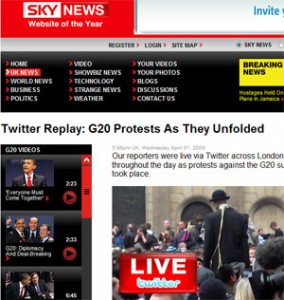 Twitter isn’t just suited to turning miserable Friday evening travel chaos into drinking sessions. Even the major news outlets are waking up to realise the power of the service. During the G20 protests in London, Sky News, who were the first to announce a dedicated Twitter correspondent, dispatched three ‘Twitter reporters’ into the area who were tasked with reporting up to the minute news via their Tweets and the use of Twitpic for images. While following the progress of the events on both TV and the major news corporations websites, I increasingly found that is was Twitter search that was providing information far in advance and in many cases in more detail than was being provided though traditional sources.

It’s not just real-time national and local news where Twitter gives access to information that other search engines don’t. It’s also a great resource for “real peoples” product and service experiences. People are now far more likely to Tweet about their opinions on purchases than they are to blog about them or add their views to a reviews website. Consumer electronics, airlines, hotels and internet services companies have all been on the good and bad side of Twitter publicity. An added dimension is given by the ability for these companies to contact their users directly.

With user growth and usage being directly proportional to the volume of information continued growth can only mean increasing the services usefulness as a search engine.
Mainstream media has been among the first industries to wake-up to the potential of Twitter, and on the whole have embraced it as an additional news channel.
So what is next for Twitter? I can see their real-time search results taking on additional dimensions, perhaps some form of relevance ranking, additional sorting options and further integration to tie it more securely to the service. Monetisation of these search results is probably not too far away